HOMELESS TEAM OF BOSNIA AND HERZEGOVINA 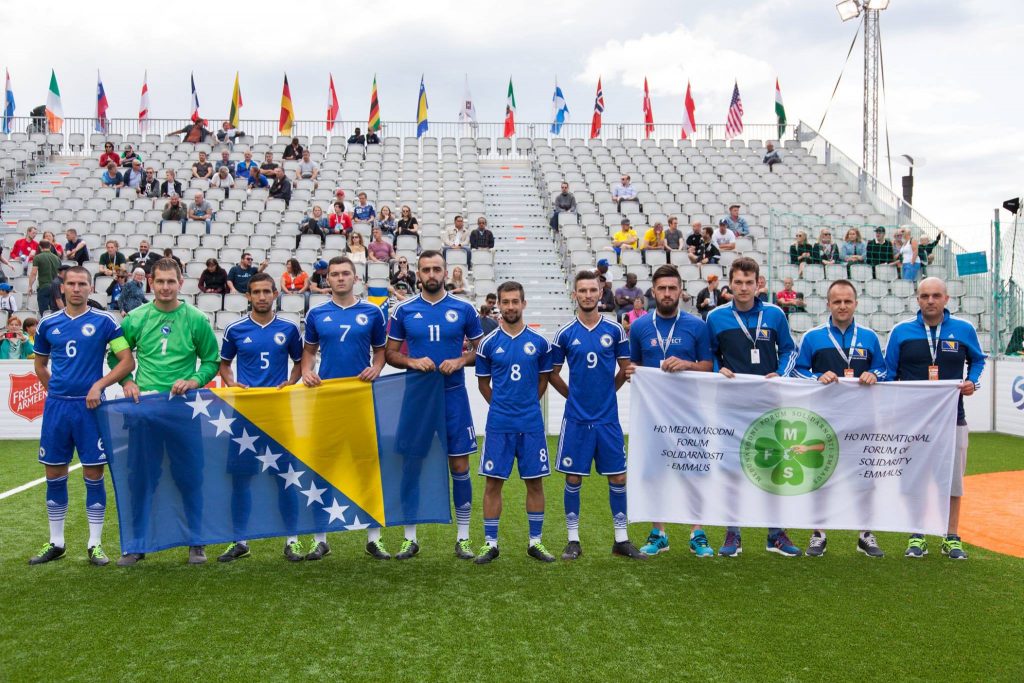 The development of B&H Homeless Team

At the end of March 2011, IFS- Emmaus representatives visited “Most“ Association (Reception Centre for Homeless people) in Split where was considered for the first  time the participation of B&H football homeless team on the tournaments in the region and on the Homeless World Cup Tournament (HWC) in the following period (Mexico 2012).

At the last tournament in Paris, our team could not play because the accreditation of our team has not been finished completely.

After fulfilling the criterions needed for the membership set by HWC organization, on 11 August 2011 arrived an official confirmation where B&H Homeless Team is accepted as a member of this organization.

International Forum of Solidarity was named as a partner on this project. In this way, IFS-EMMAUS took over the responsibilities for organization of all activities named in the project before B&H.

An official confirmation for participating at the tenth Homeless World Cup, IFS-EMMAUS received on 22nd November 2011. This tournament will take place in the period from 6th until 14th October 2012 in Mexico. At this year’s HWC, 54 male and 16 female teams will participate and besides B&H there will also be teams from our neighboring countries (Slovenia and Croatia).

Homeless World Cup (HWC) is an international sport project that was developed in 2003 and continued to take place every year since then. The last tournament was held in Paris, France in 2011. This project has for aim to show the positive side of football and to focus it on socially disadvantaged persons and other marginalized groups in the society as a way of helping the needy in the society using sport as a mean.
One of the most important aims is the social involvement of the participants that proved as the most successful strategy in many states.

HWC is a big world competition that is recognized and supported by UEFA, FIFA as our B&H FU. Global support to this project showed many professional footballers and coaches as Didier Drogba, Michael Essien, Rio Ferdinand, Alex Feguson, Eric Cantona, Lilian Thuram, Emmanuel Petit, Paolo Maldini, Arsen Venger and others.

With Bosnia and Herzegovina homeless football team, IFS-EMMAUS for the fourth year in the a row offers new opportunities to young people from sensitive and vulnerable groups (homeless, displaced persons, children without parental care, beneficiaries residing in the collective centers, members of minorities and other socially excluded and marginalized categories of society). By involving young people from the above categories in the social events through this project the awareness of society about their problems raises, but also done a great promotion of IFS-EMMAUS positive action in that direction.

Host of the homeless World Cup (World Cup) for 2015 has been Amsterdam – The Netherlands, which hosted 47 teams in men and 16 in the women’s competition from 12 to 19 September. National Team at its fourth participation in a row ended on 13th place overall. The absolute winner in the both categories was the national team of Mexico. From the previous three World Cups, Bosnia and Herzegovina has two sixth (Mexico 2012 and Poland in 2013) and one second place (Chile 2014). By HWC’s rule that one player is eligible to play in only one World Cup, we formed a new fourth-generation of homeless football team of Bosnia and Herzegovina. A new group of young people got a chance to move from the margins of society into the center of social events and to enrich their lives with new experiences.